Colorado—In the July 30 report, compared to last week, trade activity light on moderate demand for feedlot and dairy hay. Trade activity moderate on moderate to good demand for stable quality hay. Northeast Colorado finishing up baling on second cutting alfalfa. Southeast Colorado growers with junior water rights are running short on irrigation water. In the San Luis Valley, 2nd cutting hay that was cut over the last week has been hit with rain showers which growers will end up marketing on the cow hay market. Trade inactive in Southwest Colorado with growers reporting large amounts of much needed rain received this past week. Trade activity light on moderate demand in the Mountains and Northwest Colorado areas.

Iowa—In the July 21 report for the reporting period of July 6 to 17, compared to last report, prices on all classes of hay were mostly steady.

Kansas—In the Aug. 4 report, the hay market trade was slow and demand light, prices steady. Lots of rain was reported last week with all regions reporting at least something. Rain has slowed down haying and is making grinding difficult. Unfortunately, reports are coming in that there has been a lot of hay rained on and not a lot of better quality hay to blend with it. All the rain, however, has reduced the impact of the drought on Kansas.


Missouri—In the July 30 report, hay movement remains very slow and supplies are heavy. Demand is light. The state managed to put up a lot of hay this year and piles are overflowing. There is some supply concerns floating around in states to the east but it seems unlikely that will be any kind of an issue in Missouri this feeding season.

Montana—In the July 24 report, compared to the last report hay movement is moderate to good and demand is mostly good. Hay continues to sell into drought stricken Wyoming as they are currently feeding hay in many locations due to dry conditions and limited forage. Several factors are weighing on producers as they are battling grasshoppers and weevils as well as sharply lower yields compared to last year. Dry conditions are still prevalent in certain pockets of the state. Due to very light sales receipts this report will be released bi-monthly until early August when heavier receipts can be confirmed. Next report release will be Aug. 7.

Nebraska—In the July 30 report, compared to last week in the Central and Platte Valley areas baled hay, Dehydrated pellets and ground and delivered hay sold steady. In the west, large rounds of alfalfa sold $5 to $10 higher with squares trading steady. Ground and delivered hay sold steady. Buyer inquiry was good with most contacts stating phones have been very busy. Spotty rain showers across the state this week.


New Mexico—In the July 31 report, compared to last week, alfalfa hay prices were steady. Trade and demand moderate. The southern and southwestern regions are in their fourth cutting. The eastern and southeastern regions are also in their forth cutting. North central region are in their 3rd cutting. Some producers are storing their hay due to lower offers. Heavy rain reported in some of the dry areas of the state.

Oklahoma—In the July 23 report, compared to last week, hay trade continues to be extremely slow and no trend is available. Most producers are of the mindset that higher end alfalfa will continue to move. Cow and grass hay seem to be on the back burner as of now due to recent rains and the trade are having plenty of grazing grass. Demand remains good. This report will be released bi-weekly until trade picks up. Next report will be released on Aug. 6.

South Dakota—In the July 31 report, compared to last week:  Alfalfa and grass hay fully steady. Demand moderate overall, best demand is currently from dairies that are in need of high testing alfalfa.  The first cutting of alfalfa this year was put up very nice, suitable for dairy hay.  Second cutting was very difficult to put up high quality hay.  Spottty rains this week with many dry areas in need of more rain, humidity levels have dropped.  Drought conditions in Western SD, there was some rain this week in that area but it was not widespread leaving many areas in dire need of rain.

Texas—In the July 24 report, compared to the last report, hay trades are steady to firm across all of the regions, with the exception of the Panhandle where hay is being priced $10 to 20 higher per ton. Buyers have been hesitant to begin purchasing hay at the higher prices, but some trades are still being made on an as needed basis. Hay production is still going strong in most regions, but precipitation is needed in all regions. This report will be released bi-weekly until trade picks up. Next report will be released on Aug. 7.

Wyoming—In the July 30 report, compared to last week, most lots of large squares sold steady. Large rounds of alfalfa sold $5 to $10 higher. Alfalfa cubes and sun-cured pellets sold steady. Demand was good, instances very good for hay going to the rancher. Like a broken record stuck on the turntable, most of the state continues to be very dry. Most contacts stating they have not had measurable moisture since March. 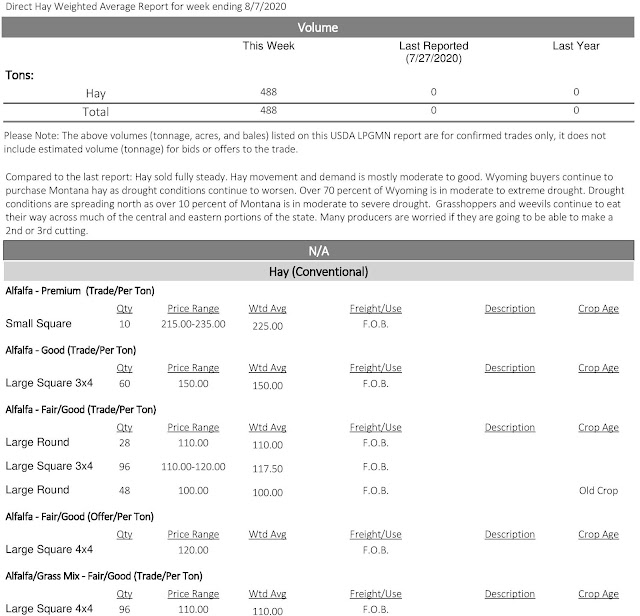 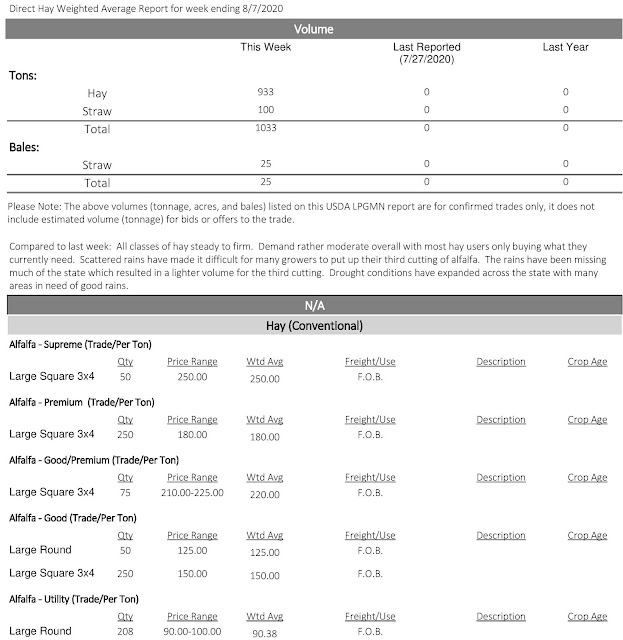 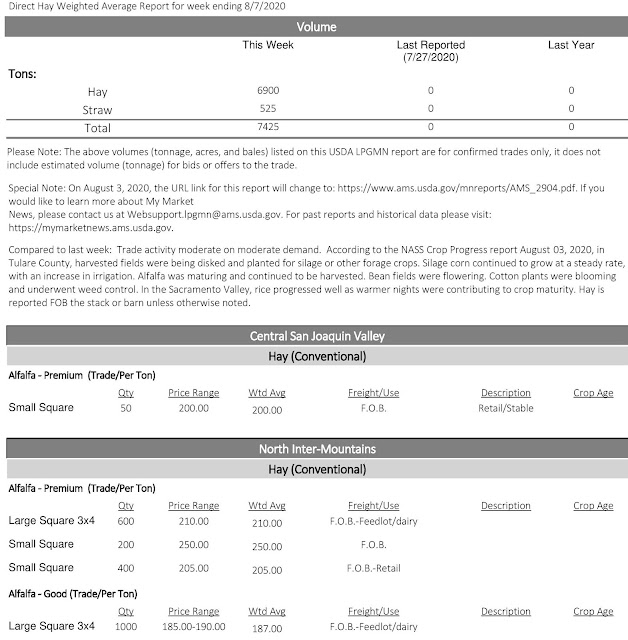 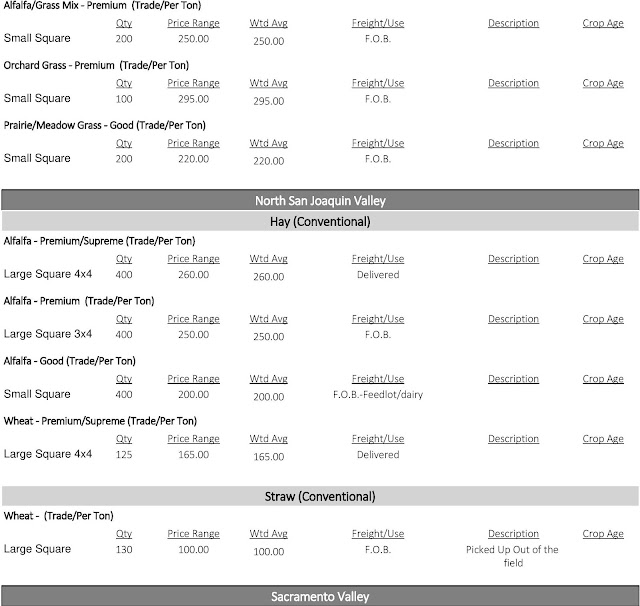 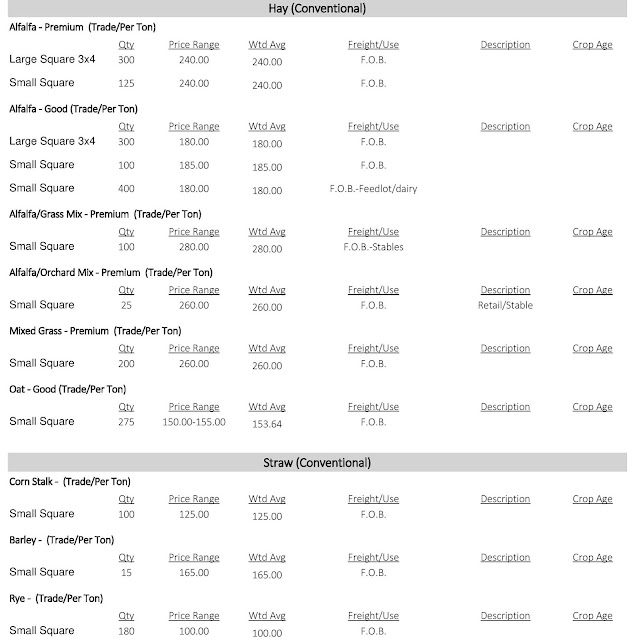 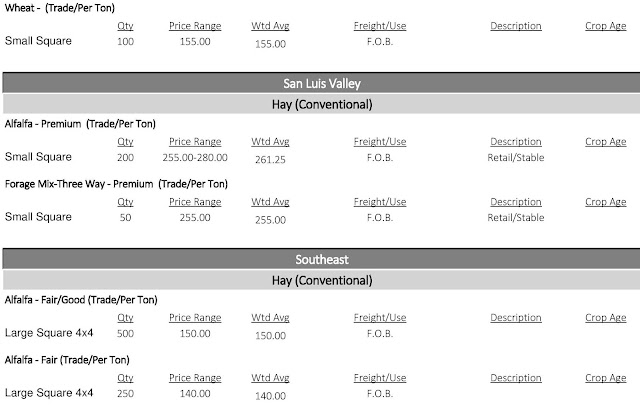 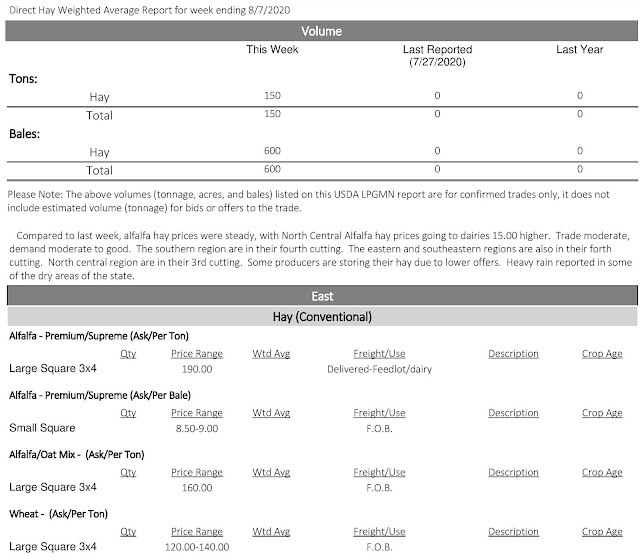 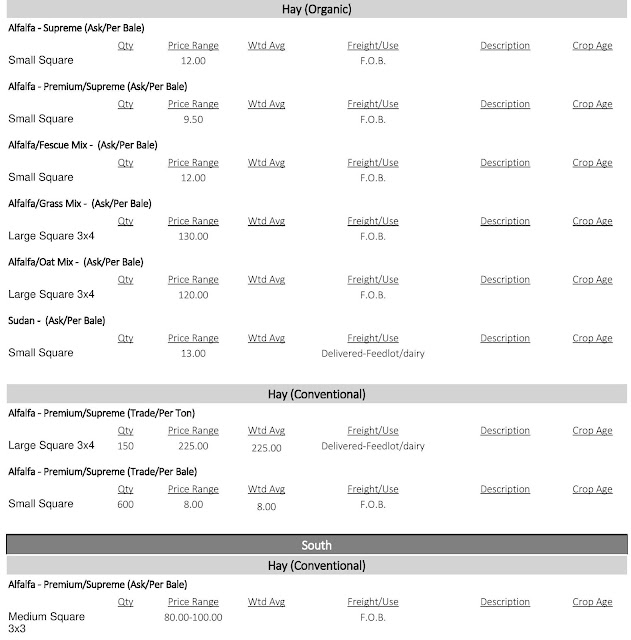 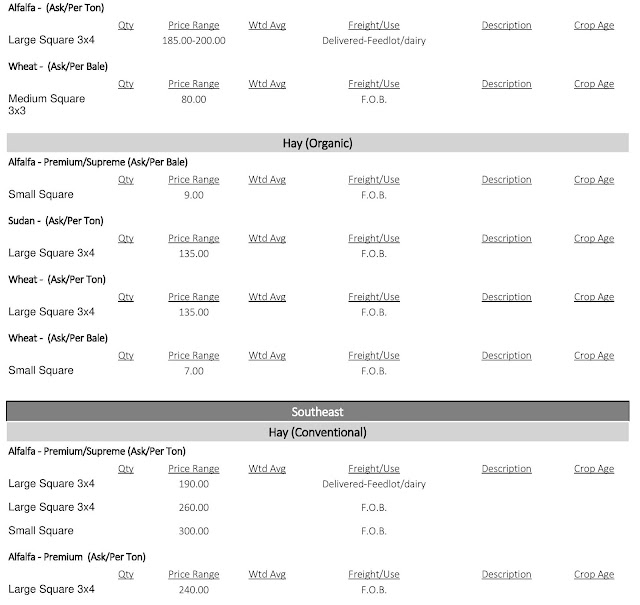