• Drought conditions are expanding in select areas of the Northwest. 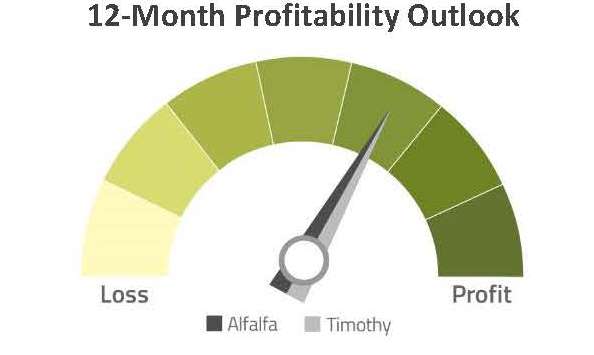 In Washington, timothy markets are in a slump. Low-quality timothy in 3x4 big bales traded as low as $80 per ton in February. Following the abnormally cold weather in the middle of February, price recovered to $130 to $150 per ton. There has been only one trade of premium timothy since October, suggesting inventory of high-quality hay is very low. Premium alfalfa price stabilized around $170 per ton, down 15% from fall. Fair to good quality alfalfa is trading between $125 and $150 per ton.

Washington state has the highest average corn yields in the U.S. Higher corn prices will drive producers to take a first cutting of timothy or alfalfa, then plant corn for fall harvest. Irrigated corn yields are consistent; prices are higher, harvest costs are lower. All those things favor corn over hay. More importantly, hay producers are favoring corn because corn can be sold to generate cash at any time. Hay is less liquid and cashflow is a larger concern. This will tighten supplies on later cuttings. Harvest weather is more variable for first cutting. The balance between high- and low-quality first cutting will be key this year.

In Idaho, premium alfalfa is trading around $175 per ton. Fair to good hay prices are between $130 and $150 per ton. Prices for dairy-quality hay are stable. Higher soybean and canola meal prices will provide tailwinds to protein prices as alfalfa gains back market share in feed rations. Alfalfa as a protein source in dairy rations is competitive with soybean and canola meal. Use in feed rations is on the rise. Dairy-quality hay prices will follow soybean meal markets more closely than in the recent past.

In Montana, alfalfa/grass prices increased around $50 per ton over the winter. Expanding drought conditions in eastern Montana drew hay from central Montana to fill the void over winter. Now, producers are concerned for new crop production. Hay flows toward drought. This may be an opportunity to market the overhang from the 2020 north Idaho and Washington hay crop.

In the Oregon-California Klamath Basin, California drought allowed producers to market hay south through the winter. Hay sales to California drew inventory down in Oregon. Like in eastern Montana, drought will curtail irrigated hay production. Lower production in the Klamath Basin will bolster prices but not enough to offset production losses.

The USDA announced a new round of ‘Pandemic Assistance for Producers.’ These payments build on Coronavirus Food Assistance Program (CFAP 2.0) payments for alfalfa. An additional $20 per acre is available to those who previously enrolled in CFAP 2.0. Producers who have not enrolled have an additional 60 days to sign up beginning April 1.

The USDA is projecting farmers will plant 91.1 million acres of corn this spring, an increase of 325,000 acres year over year and the highest corn planting since 2016-17. However, 91.1 million acres was well below analysts’ expectations. Soybeans are also expected to experience record planting in 2021 with an estimated 87.6 million acres, compared to 83.1 million in 2020. Like corn, the projected plantings for soybeans were below expectations. Corn and soybean futures markets rallied. Higher corn and soybean prices will provide tailwinds to hay markets, especially alfalfa.

Shipping container disruptions are creating a bottle neck in exports. Container volume at Los Angeles/Long Beach was up 43% year over year in February. This is the largest year-over-year increase on record. Normally, an increase in imports would drive the price of empty containers lower. However, the east bound (China to the U.S. West Coast) freight rates remain historically high. Shipping containers back to China filled with agricultural goods takes time. With the opportunity cost of the empty container in mind, shipping lines are incentivized to return the empty container for a quicker, higher paying return trip. This structural incentive to bypass agricultural exports, especially hay, will leave unshipped inventory when the new crop is harvested beginning in May.

There is some opportunity in the market. High-quality hay is scarce. Supplies of low- to mid-grade timothy and alfalfa are abundant. Producers with high-quality new crop will quickly bypass low-quality old crop in line for shipping.

Alfalfa exports to China have recovered after two years of trade war and associated tariffs, up 40% year over year. Exports to the Middle East in 2020 decreased but were offset by recovery in Chinese exports. Total alfalfa exports were up 2% in 2020, compared to 2019. Nearly all the additional alfalfa exports came in the first half of 2020. The second half suffered from container availability. Alfalfa are separated from that of the Southwest, the Northwest fared worse. Alfalfa exports from Seattle/Tacoma were down 14% in January. This trend will continue, driven by shipping disruptions.

A trade spat between China and Australia resulted in tariffs and retaliatory tariffs. Australian beef and wine have suffered. Oaten hay does not face tariffs, but several hay exporters have not been allowed to renew their import licenses in China. Timothy and oaten hay are partial substitutes in feed rations. Less oaten hay shipped to China means opportunity for Northwest timothy exporters to fill the void. This represents a net new market for low-quality timothy, although the market remains relatively small. 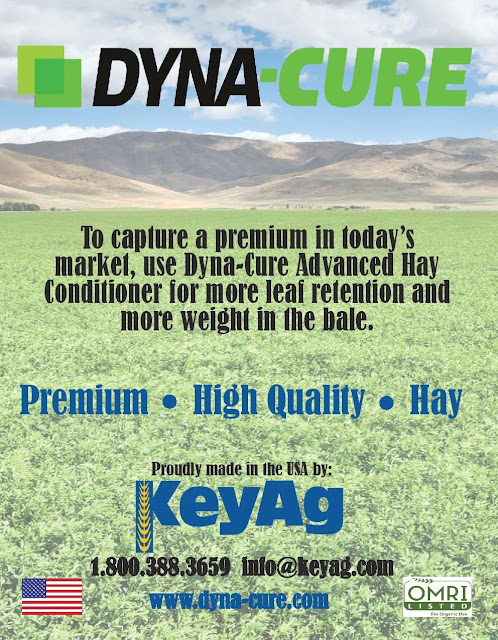